I went on Nextdoor to ask if anyone had a bike laying around for Zak. Within 12 hours I was offered 5 bikes. “I’ll leave them at the top of the driveway” everyone said. Nextdoor is pretty cool this way. But alas there’s the privilege thing again. I just guessed neighbors would rather give away a bike rather than deal with the hassle of selling it. I presumed correctly because I feel the same way. We are always giving stuff away on ND ourselves.

(Random aside: we have made several very good friends from some of these handoffs. One couple stands out who reads this letter. I won’t say the item. It was very personal and would make many readers eyes bulge)

The next morning I notice Zak’s bike has a flat already. I found out a local bike shop is open to figure I’ll just buy a new tube after work. Around 10 am I pop in to check on how Zak’s schoolwork is going. He mentions in passing, “I can ride a bike now daddy”. Turns out, that morning he hopped on Max’s smaller bike and just figured out how to ride.

First, pure joy. Seeing your kid ride a bike for the first time is just great. Same feeling I had when I saw him really swim for the first time. Made my day. Made my week really. He’s been bolting outside to ride every day. Just pure.

The second reaction is just a self-reminder to chill the f out. By suburban standards, he was “late” to riding a bike. When I asked him if he told his friends on the class Zoom call that he could ride, he snapped “Daddy, all my friends already know how to ride a bike”. I suspected that but played dumb.

We gave riding a bike a shot last year and he was scared and resistant. I left it alone. Didn’t feel like battling. But riding a bike turned out to be like potty-training. At some point, they are just ready. And when that happens they learn the same day. Both boys were potty-trained pretty late in age. But it took one day.

One of the jokes around here is that I’m the laid back one and Yinh is type-A (I say joke but believe me this leads to its share of, ahem, “misunderstandings”). But when you combine us it’s like multiplying by a negative…the result is just laid-back. I’m not sure if there’s a lesson in there, but sometimes it’s probably just useful to remember that it would take an extraordinary effort for someone to grow up and NOT know how to use a toilet.

Finally, I’ll leave you with a pic of me acting like my beard ain’t grey. On Wednesday, Yinh and I attended one of her friend’s 40th birthday Zoom party. I wore buttons for the first time in a month. Sia’s choreographer led us through 20 minutes of dancing. Relax, the bottles were just used as props. Like I said, it was Wednesday.

I guess we think the names of the days still matter. Also I’m from NY, the “B” isn’t for Boston. Maybe Bitcoin. 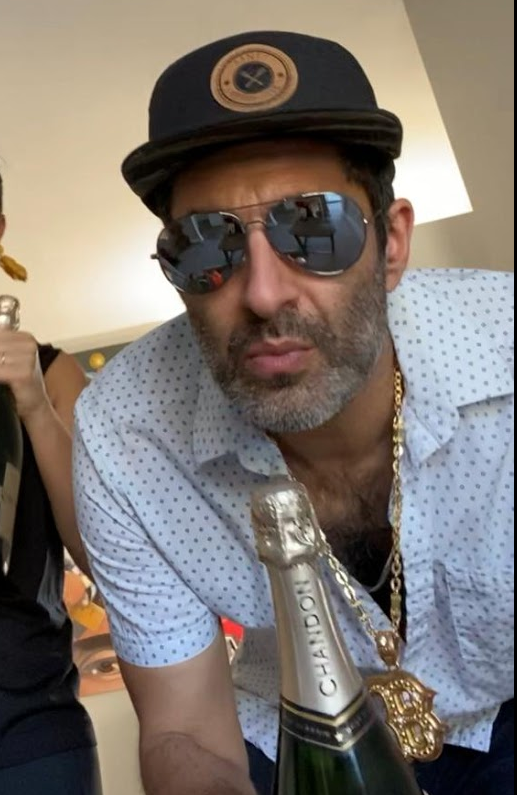