One night, while browsing Netflix, I came across a show called Valentino. I gave it a chance.

Oh man. I wasn’t ready for wave of feelings it conjured. I was instantly transported back to childhood.

Valentino is an Egyptian show with English subtitles. The mannerisms, expressions, body language, intonation, dynamics between old and young, male and female. I have not viscerally felt that way since perhaps 2005 when I visited Egypt. To be totally immersed, in a culture that is both deeply familiar, and philosophically foreign.

The show is quite ridiculous and has that Arrested Development energy (RIP Jessica Walter this week). I’ve urged my family to watch it. My mom finds it hard to watch because the male lead actor, now 80, plays a hapless, pathetic character. But he’s a famous, celebrated actor in Egypt who my mom loves and has even seen on stage. To see him in this role is too much for her to bear. My sis however enjoyed the same nostalgia feeling I got. Even her husband, who our clan affectionately refer to as “The White” , recognized our family in the show’s dynamics.

A crazy aside: we thought “The White”  was a just a European mutt, but 23andMe sent him a revision 2 weeks ago that stirred intrigue. He’s got Egyptian in him! So many questions. First one — they send revisions out of the blue?! And not to be gross, but can chromosomes cross…oh nevermind. Here’s the proof: 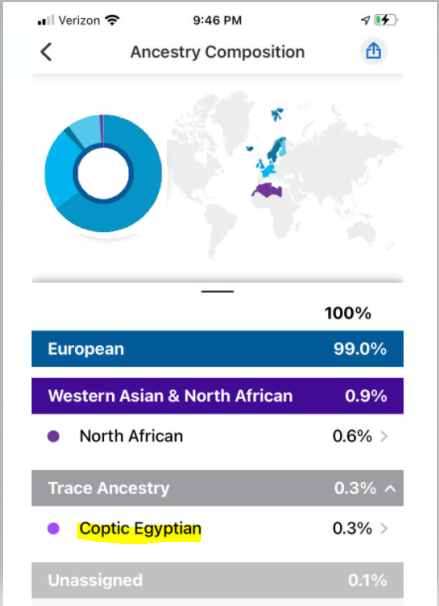 Anyway, the ship stuck in the Suez Canal has brought Egypt into focus for 2 American seconds. Nick who lived and worked there wrote a resonant thread about its culture. It’s short and worth a read. Between the show and the thread I reflected a bit on my own experience.

I’ll leave you with my response:

Anecdote…a friend of mine here in the states (but born in Egypt) went back to Egypt and started a trading shop. He is a good dude and really wanted to teach a group of Egyptians to trade. The “fatalism” work ethic eventually caused him to abandon ship after 2 years. He described constant no-shows, excuses, and frankly people had a hard time connecting the dots to why making money was worthwhile. No sense of urgency. Nick’s use of “fatalism” captured the essence of what my friend reported to me. I don’t see this quality in Egyptians here [in the US].

I’m not on top of Egyptian politics and I’ve only been there once. Arabic was my first language though i lost it by the time I started school. I can understand what I call “household Arabic” and I Spanglish it when I speak. I was surrounded by Egyptians in Brooklyn and NJ growing up. I actually rejected much of its culture growing up. My mom is a very independent thinker and a bit brash and let’s just say she doesn’t stay in her place. It had a big impact on me and my sis.

I have a lot of issues with the culture and yet I find the people to have a beauty that I am drawn to. There is def something that I deeply enjoy in their mannerisms, expression, and warmness that I think is cultural and that I have affinity or at least nostalgia for.

Yinh and I contrast my family quite a bit from hers. My family wears emotions on sleeves. Perhaps hot blooded, stubborn, but very expressive and openly loving. Big fat Greek wedding kinda crowd. Very extraverted. Whereas my wife’s (Vietnamese)fam is more even keeled and reserved but every bit as tight. They are also so much easier to deal with (shhh, don’t tell).

Anyway, it occurred to me that Nick’s comments about Egypt are the type of comments read by the wrong person would get him egged. There are eggshells everywhere around topics like these but I find the “feeling” of being around different cultures to be real and a gift. It’s a treat to know that immersing yourself in another culture can transport you. It’s one of the most interesting things about being the animals we are.

There’s probably cultural features that are absolutely good or bad. My mom could never live in Egypt but likes visiting. Debating these differences sounds like a very bad block of Twitter city that I avoid and I’m not especially educated on topics like that. I just enjoy feeling the differences in how people talk, touch and communicate in general.

I just started watching Valentino on Netflix which is like an Egyptian Arrested Development. It is totally transporting me to a different cultural time in my life. Overbearing matriarch (grandma “teta”), men useless in a particular way, polite insincerity mixed with love.

If you grew up around a different language or culture but feel a bit distant form it today, I urge you to take a chance on a foreign show that might recapture that. It has never been easier. I can’t emphasize how trippy and amusing watching Valentino has been for me. If you had access to a totally different world that has since disappeared from your daily consciousness, this is a reminder that it’s both fun and easy to rediscover.

And if you specifically have an interest in Egypt, Kamil recommended this book that I immediately ordered. Will I read it anytime soon? Insha’allah. 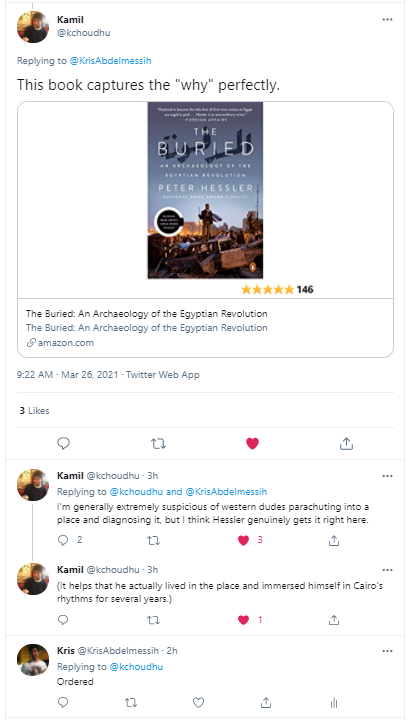