Protest. Riots. Justice. Change. It was hard to think about anything else this week. I have a lot of scattered thoughts. I keep fixing to them like stars in a black sky. I admit I cannot seem to find the constellation that connects them so I’ll just list the links that resonated. I’ll follow it with some of my own riffs at the end. I’ve picked up a lot more subscribers recently on the back of my financial posts. I probably don’t have enough goodwill to offend. If sorting my feelings here makes you uncomfortable you can always reach out. I don’t usually do posts like this but it felt a bit off-key to just write one of my typical posts. And of course, there’s always the “unsubscribe” button. I appreciate every reader but this is just a free email from a random middle-aged dude.

My Favorite Links From The Week

1) Twitter thread of a fan describing how Dave Chappelle changed everyone in that room that night. 200+ people became part of the solution if they weren’t already. Even a privileged girl in a privileged hat with a privileged mindset. Point is, it doesn’t matter what you thought before. You can always change. (Link)

@pickledmint: Tips on engaging in conversation with family about the BLM movement. From your local social worker who has dealt with extremely conservative, racist, bigoted, homophobic family members their entire life. A thread with examples. (Link)

2) Bob Seawright’s letter this week was bullet after bullet of insight. While I’ll mention my favorite parts, I encourage you to read the whole thing. (Link)

Links That Stood Out To Me

On the insidiousness of racism: 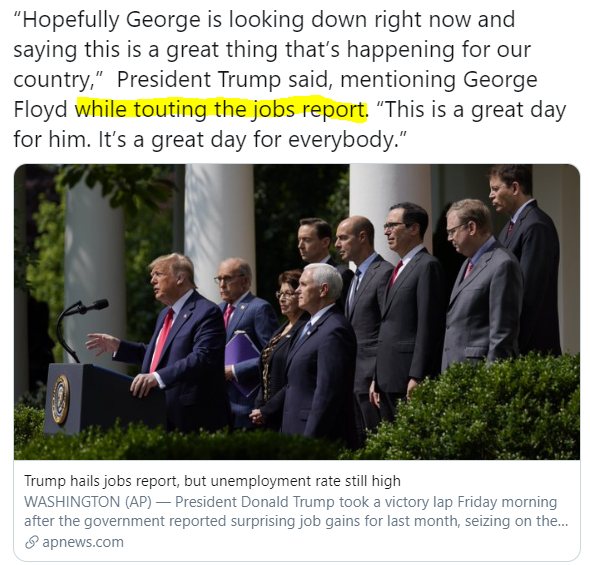 When I first saw this my head almost exploded. But it turns out this was a turduken of a headline sewed together by the AP to make Trump look like the pure spirit form of himself instead of the one that pretends to be a leader. But no, if you watch the clip he exercised enough restraint somehow to not actually link Floyd to the economy. This is just another piece of clickbait polluting the air and with no recognition of its negative externalities. If you wanted to make Trump look bad, you could just report on him honestly. By exaggerating, you cry wolf. You desensitize people to his nihilism.

Some of my own unorganized thoughts. Excuse the randomness. Much of it is open-ended.

Speaking of actions, I know I’m under-educated in this area. I rambled the thoughts I had this week. It just felt like the thing to write down. If not for you, then for me. You could probably live a thousand scholars’ lives and still be grasping for answers. But you don’t have that luxury anyway. You get 85 laps around the sun give or take. You are going to need to make decisions without all the information. If sharing what I saw this week provoked thought one way or another then I hope we both inched a little closer to our better selves.

If you are interested,2 organizations I’m a fan of both empower black or underprivileged through education in STEM and business respectively.

They can take money or time.

One thought on “Part Of The Solution”