My friend and former colleague Jason took exception to the viral tweet I referenced last week about how shorting a bi-modal company is like an option. Not because it isn’t but because all equity is an option.

In short, the entire viral tweet is a tautology.

Jason joined Twitter to respond to it. Jason’s gripe was that all equity is effectively a call option struck at zero (you can argue that a positive book value sets the call strike higher but it doesn’t materially change the point).

Jason argues that if the viral tweet pretends it is saying anything beyond “being short stock is like being short an option”, you are mistaken. There are several reasons why, and I’ll use my intro to twitter to go thru them…(Jason’s reply)

Where do I stand?

I liked the original @HedgeDirty tweet because I am just a fan of presenting ideas in different ways. The flaws in the tweet are real and technical but it conveyed a correct impression even if it got there incorrectly. To Jason and @HedgeDirty the riskiness of shorting a bimodal company whose equity is probably worthless is obvious. I appreciated the narrative style which reinforced that point. Even if it’s self-evident to anyone who shorts stocks.

But I also see learning opportunities in deconstructing the flaws in the tweet.

You can read Jason’s reply to see the flaws he found. Especially resonant was the observation that the 0 strike call is a 100 delta call. It has no gamma or theta. The original tweet claimed otherwise.

What would I focus on?

1) Let’s do a little math to find the annualized vol. The first thing to note is how the bi-modality creates a very volatile stock. 125% per year standard deviation.

(Warning: it doesn’t make much sense to use standard deviation based on a normal looking return when we already stated it was bi-modal but the obvious takeaway is “damn, this thing is going to make large moves in return space.” If you know nothing else, you know going short this thing is like barebacking a bucking bull. Size appropriately.) 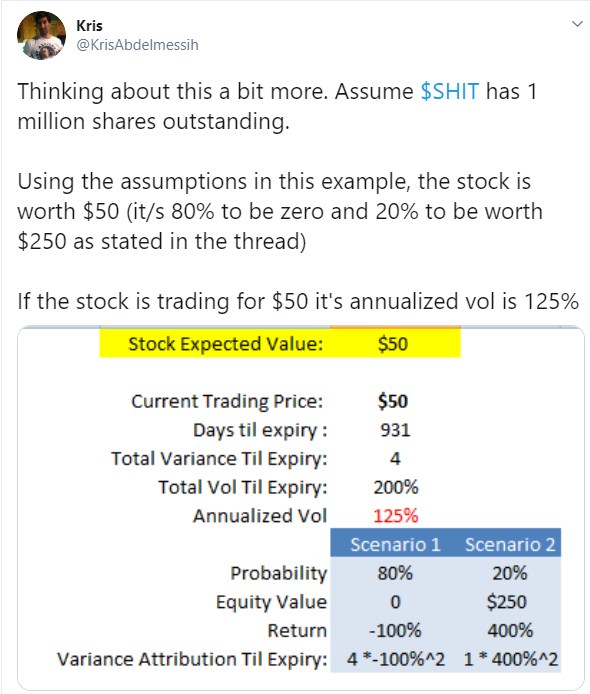 2) My biggest gripe with the example. The stock doesn’t trade for $185 because it’s hard to be short stocks.

It’s not trading for $185 with a theta that pushes towards zero or anything like that. We don’t need to invoke Greeks for an alleged $50 fair stock trading for $185. If it’s trading $185 the market doesn’t agree with the assumptions that compute a $50 fair value. Full stop.

Despite the flaws, I enjoyed the original tweet. You can read plenty of @HedgeDirty threads and see it’s a good account to follow. For example, the Why You Should Never Hold Levered ETFs thread is great. I’ve written about the brutal math of levered, especially inverse levered funds before.

Shorting bi-modally distributed stocks is hairy. If it feels like it’s being short an option it’s only because the stock is volatile, equity is an option, and being short options is volatile. Nobody shorting stocks should have needed an education from that tweet. For everyone else, they should be aware of errors in mapping it to option theory even if I think overall the thread was net positively educational.

As for Jason who has been trading options since the late 90s, I imagine he felt that @HedgeDirty borrowed his bass and played it with a pick. Only Paul McCartney gets away with that.