This past Wednesday, a NYT oped wrote:

..But after watching the stock market plummet on Monday and governments struggling to get hold of the contagion, I’ve begun to smell doom.

“Hilarious. He only needs reactions of others to react, not basic facts.”

What do you think of that Twitter response? Is the oped author guilty of herd thought?

Let’s take a detour first, I promise it will re-connect in the end.

There are various ways humans self-organize. Home life is an autocracy. Parents wield absolute power. If the kids get to vote on what’s for dinner it’s because the elders signed off on a temporary puppet democracy. In broader civilization, there are networks and governments. Plutocracy, theocracy, monarchy, parliament, communism, fiefdoms, tribes, democracy. No matter which backdrop they must operate in, one of humanity’s most clever constructs was the marketplace.

Through trade and barter, markets focus a multiplicity of needs, desires, and trade-offs into prices. Prices allocate resources. High prices attract supply and ration demand. A consistent ability to shrewdly respond to prices either as a company, investor, or consumer leads to profit. The potential and motive to profit certify prices as honest signals.

Democracies are controlled by votes. All votes are equal. But, markets are not democracies. To understand the difference I’ll recount a lesson I was taught as a trader trainee 20 years ago.

If you poll the population, “Did humans walk the earth at the same time as dinosaurs?”, the responses come back split about 50/50. That’s democracy.

Now imagine there is a contract that trades openly on an exchange that is worth $100 if it is true that dinosaurs and humans co-existed and $0 if that is false. Even though the population is split, this contract is not going to trade for $50. It’s going to zero. Why? Because the small percentage of people and scientists who know the truth are going to see a profit from selling this contract even down to $1 since they know this proposition is false. And if the scientists don’t have enough money, they will be able to convince or get hired by people with more money to back this venture of selling this contract to zero.

That is the value of markets. You get correct answers. While a democratic poll may tell you what people believe or desire, it does not assign the proper truth value to the proposition. Now consider the implications of being correct. You make more money which gives you more resources to continue being more correct. The marginal price in markets is set by the market participants with the most money and as a group, they have the best-calibrated assessment of what fair value is. And these groups are in the minority of the total betting population. Markets are not a democracy. To dismiss prices is an impressive act of arrogance.

An Aside For Finance Folks

You may recognize traces of strong-form efficient market hypothesis in this view. It is fashionable to point to market failures and bias which can distort the truth value of prices in our economy. Markets are nested within laws that are nested within our democracy. There are many joints in the structure subject to friction or even corruption which dilute the purity of markets. But for a market to be efficient doesn’t mean its truth value is decreed by the all-knowing. The standard to be efficient is simply to what extent you can earn an excess risk-adjusted profit betting against it. Well, by that standard market prices have a sterling track record revealing most players to be nothing but tourists. It could be wrong, but that doesn’t mean you can do better.

The correct reaction to strange prices is not to say “that’s stupid”. It’s “why is somebody paying that?” Prices are amazing discovery tools to explore “why”. When Vancouver condos are trading at egregious multiples over local wages, rather than presume the buyers were suckers, you may have discovered that Chinese nationals were restricted in how much Yuan they could expatriate. Real estate is a convenient store of value, not just shelter. While it’s not as stable as a savings account, the price of real estate as a safe haven for cash is not being set at the margin by someone like you. It’s set by a family across the world who finds its local savings account a bit too close to its government’s paws. The extra volatility is seen as nothing more than a convenience fee.

“Hilarious. He only needs reactions of others to react, not basic facts.”Record scratch. Stop right there, freethinker. 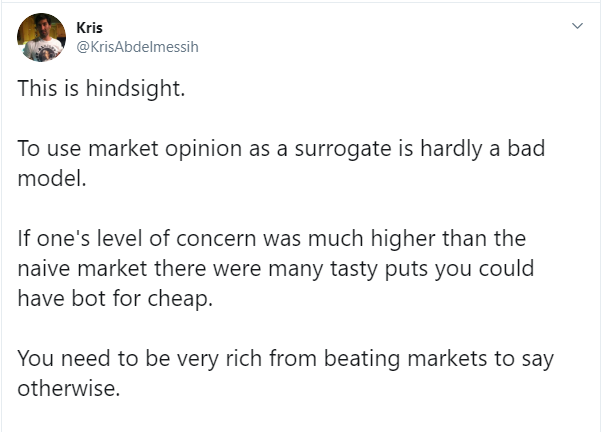 When AAPL releases earnings, you don’t read the 10Q unless that’s your job. You look at the price after-hours to see how the market understood it. When a star player is placed on an injury report you look at the game line to see if the odds changed. These are correct reflexes for good reasons.

When you hear people lament that market prices in response to COVID-19 are being set by traders who know nothing about virology instead of doctors, pause for a moment. Are the sharps who set betting lines doctors capable of handicapping recovery times of turf toe or patellar tendons? Of course not. Their expertise is in looking at past data, pattern-matching, and propagating newly calibrated parameters through proven models to generate bets. A sharp’s long-term track record is a self-evident testimonial.

The best investors are information-synthesizing odds setters. This is being done across decentralized domains. The option guys are betting on volatility surfaces, the macro gals are thinking about growth rates and international money flows, while the fundamental folks are thinking about how many people are going to be watching Netflix, buying Purell, and working remote. VCs are Slacking their biotech founders while reporting back to their investors on calls. Those same investors close the loop back to the hedge fund managers who look up from their own war room analysis. The emergent consensus from all this hive activity is in fact what finance is. A networked machine optimized for pricing future states of the world. This optimization likely includes being networked to medical intelligence through its fastest pathways. The fact that it’s not all medical professional pathways should not offend. Instead, it speaks to how efficient this architecture is.

They say when you write to imagine who you are writing to. I feel like I just wrote to that person who has a market take based on what his rheumatologist uncle told him about viral infections. I’ll take my chances that the smartest people setting prices have access to the smartest minds in epidemiology.

The topic of market efficiency, the validity of prediction markets, and the wisdom of crowds would take several scholarly lifetimes to sift through. Who has time for that? I’ll just give you the tl;dr based on my professional experience.

If you are interested in the study of when to diverge from consensus, then muster some courage to read Inadequate Equilibria: Where and How Civilizations Get Stuck by Eliezer Yudkowsky. I plan to write a summary blog post of it one day but in the meantime read it for free online (Link).