2017 was a historically low-vol year, rewarding options sellers despite selling lower option premiums as the year progressed. Like they found a broken slot machine at the Cosmo. It wasn’t until the Feb 2018 “volmageddon” in exchange-traded VIX products, that retail discovered the dangers of selling options.

In the past year, retail, led by r/WSB, is back in the deep end of the options pool. This time they brought swimmies — they are only buying options. This limits their losses to the premiums.

As opposed to professional vol traders, most people use options as a way to bet on direction. You buy a put to bet on a stock going down and you buy a call to bet on a rally (or an “up” — a term coined by my doctor friend who always used to make fun of us finbros who talked about “puts and ups” all the time when we were in training). I tend to dissuade people for messing with options unless they have a very specific risk to hedge or if their speculative thesis is well-defined. Since options expire you need to be right not just on direction but timing as well. There’s a lot of ways to lose, get lured into trading more, and generally chop yourself up.

I’m going to demonstrate how you can lose money despite being very “right”. For good measure, we’ll extend the conversation to how hedging can actually increase your risk. Let’s jump in.

The recent action in GME justified the cigarette warning label I put on options. If the option user doesn’t appreciate the role implied volatility plays in an option price, then Benn’s tweet is mystifying:

Put options increased in value as the stock went up.

Then, with the stock on the way down @mark_dow tweets:

My kids would chalk this up to “opposite day” (apparently a modern holiday where kids wear pajamas to school). Alas, there is a more boring explanation:

If you are eager, we can drill down a bit.

Vol traders care about these cross-currents because of how they accelerate or dampen the price of options. These effects alter hedging flows which change buying and selling pressures. Outputs become inputs so each sub-cycle in the process looks like a foreshock to something bigger, or the aftershock to something dissipating.

This might sound theoretical or academic but it’s the nuts and bolts of managing volatility portfolios. An option book with many names, maturities, and strikes looks like an amorphous blob until you use these concepts to give it shape. Once it has shape you can recognize what kind of animal it is. You can predict how it might respond to different scenarios. The measurable risk is how it will react to the market’s movements. The stock is going to do stuff. That’s a given. You are not allowed to be surprised by that fact.

The real concern is if the portfolio, this animal under your care, acts outside your range of expected behavior.

Rest easy. That was utter overkill for investors or even casual option punters. To understand why puts got cheaper on a selloff, you just need this picture: 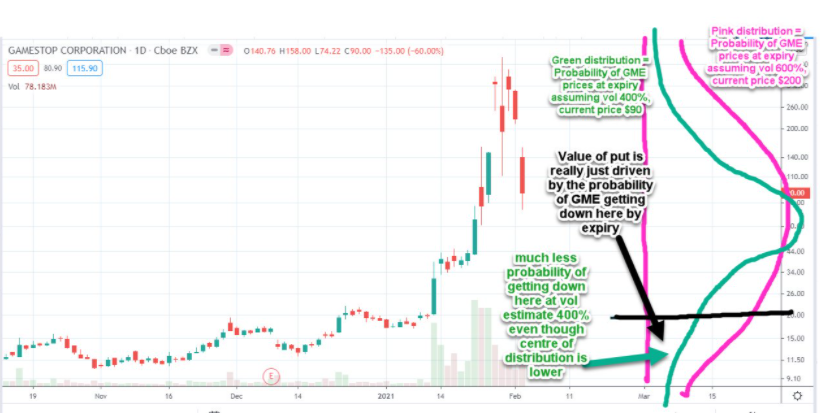 It is a beautiful and simple visual intuition constructed by @therobotjames.

Despite the higher stock price, the purple curve imputes a higher probability of the stock going below $20 because the distribution is much wider at 600% vol than at 400% vol. The impact of the vol totally dominates the moneyness, or distance, the stock is away from the strike. Another way to say this is “the $20 strike is closer to $200 than it is to $90” if the volatility is that much higher when the stock is $200. This is easier to understand if we simply make the volatility disparity wider. Imagine a govt bond that trades for $100 par and a stock that trades for $200. Nobody would be shocked if the 50 strike put for the stock was worth more than the 50 strike put for the bond.

I can see you scratching your head. In GME, we are talking about the same exact asset at 2 points in time with a contradicting proposition: namely that the probability of the stock dropping below $20 when the stock is $200 is higher than when the stock is $90!

This paradox is an illusion that happens whenever you have the benefit of hindsight. You don’t know which of these prices is the true odds. You can only trade with the information you had at the time. You cannot arbitrage the relative pricing between the 2 states of the world that we have the luxury of seeing in the rearview. Looking back you can say that the stock’s chance of going below $20 was underpriced when it was trading $90 or that it was overpriced when it was trading $400 but you couldn’t make those claims at the time. They only seem paradoxical when compared to each other.

Hopefully the tuition wasn’t too steep. Not all lessons are as cheap as a defined option premium.

Professional option traders adjust option greeks for spot-vol correlation. In the GME-case the correlation is positive just as it is in agricultural commodities. As the price increases, the vol increases. Most markets have a negative spot-vol correlation. The VIX falls when the SPX rallies. This is also true in the oil market. A supply of options hits the market during rallies as large hedgers overwrite calls.

To adjust for this, option traders will model a negative spot-vol correlation or “vol beta”. For example, suppose your ATM call option typically has a 55% Black-Scholes delta. you might model a 50% delta only, knowing that if the future goes up $1, your call option probably won’t increase by $.55 since implied vol will fall. (In fact, one of the ways to know if the counterparty you are quoting was a bank or not was by the delta the broker wanted to use on delta-neutral structures. Banks often quoted with Black-Scholes deltas while prop shops used deltas which incorporated vol betas, effectively lowering all call deltas).

When you model vol beta you are usually making a trade-off between hedging local behavior of common moves versus more unusual sized moves which will break the spot-vol correlation, in turn upending calibrated deltas. If a skirmish broke out in the Strait of Hormuz and oil ripped 10% higher I would not expect volatility to fall. Therefore, you also need to consider a matrix of outcomes.

(This is a hypothetical picture which tells us if oil rallied 10% and vol increased 50% we would lose money. Note that if vol fell in accordance with a vol beta we would have made money).

Even with respect for local and jump spot-vol correlations, you can still be caught off-guard. In nat gas, I’ve underestimated just how GME-like its vol surface can change. I’ve seen put prices not budge despite a 20% selloff in an underlying. If you are running a hedged book and have any long futures against the puts you enjoyed the full drawdown in futures without any offset from the puts. Enough to make a burly man cry.

The idea that “you only risk your premium” when you buy options is only true if you do not hedge. It’s diabolical to get crushed on a supposedly neutral position. Why? Because, you thought you were hedged. This tricked you into buying more puts than you would have if you didn’t hedge.

(All basis trades have this dangerous property. The illusion of being hedged induces you trade bigger or use leverage to push a small edge.)

The GME put holder who lost money on a sell-off now understands how the change in implied volatility explains the loss. Regrettably, this is like being told you missed a flight because you were late. It’s just a mechanical explanation. What you really want to know is why did volatility come in as much as it did? In option trader terms, “why did the vol beta outperform or underperform in the first place?”

The beta itself will have quite a bit of variance since a price can follow many paths to a destination. Those paths will each be a sample of unique realized volatility. Did the price grind to X or did it gap to X? The realized beta will vary from your projected one depending on the path and the market’s interpretation of that path. If the stock gaps down due to a specific bit of news (for example news that a big short is done covering or the company issuing more shares) the gap can actually be vol-reducing as the market interprets the news as “stabilizing”. If the gap comes with no explanation, then the market might interpret this data point as another mystery piled on an already burning heap of confusion. The market will presume that the crazy stock might just rip back up again. In this case, the vol might hold up better on a sell-off that occurs without a reason in contrast to the the prior case where the reason had the narrative effect of curtailing the upside.

So in the GME case, most of the reasons the price can go down are stabilizing. We expect options to be sold in response to a sell-off, and for the vol to decline. But “most of the reasons” does not mean 100% of the reasons so there is a probabilistic distribution to what the realized spot-vol correlation could be. And that’s why we still have surprises.

The Beauty Of Options

Ultimately, options help to “complete” a market. A simple stock price is just the expected value of a stock (equity risk premia and arbitrage pricing theorists are welcome to have a cage match over that statement. I’ll be out back selling beer). By imputing more information than a one-dimensional expected value, option surfaces give us a richer picture of expectations. What’s considered stabilizing, and what’s considered unthinkable are encoded in options markets.

There’s a silver lining to the WSB obsession with options. Some of these people who showed up for a thrill will stick around to learn how to listen to how a vol surface whispers.